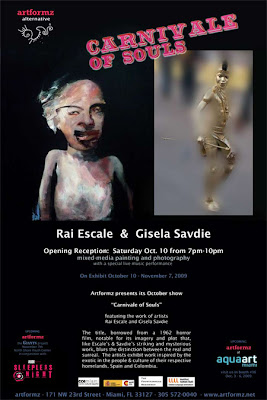 Artformz presents its October show “Carnivale of Souls” featuring the work of artists, Rai Escale and Gisela Savdie. The title, borrowed from a 1962 horror film, notable for its imagery and plot that, like Escale’s & Savdie’s striking and mysterious work, blurs the distinction between the real and surreal.
Rai Escale works are an exploration of the layers of existence. He searches for a distinct image usually lying hidden under other images, creating mysterious compositions of bits and pieces blended into a surreal whole. Gisela Savdie’s intrepid photography boldly captures the face and the persona that’s hidden behind the mask of Carnival. Are the figures in these images confronting an inner soul? Are they dissecting reality through layers of shadows? Are they dealing with the real or the surreal? The bold works of these two artists raise questions and inspire wonder.

“Carnival of Souls” is an exhibition that deals with that other reality, the one that strives to capture the inner shadows, shadows that seem to appear and disappear behind the lens, covering the facade with laugh or cry, with sparkles or dust, with happiness or sorrow, with the sinister and dark, as well as the joyous and gay, with the taste of comedy and tragedy that we call life.

Escale is a visual artist residing and working in Barcelona, Spain. He graduated from the Fine Arts School of Barcelona. He has exhibited widely in Europe and recently completed an invitation to the prestigious Fountainhead Residency here in Miami.

Gisela Savdie, originally from Colombia, now resides and works in Miami. She graduated from the International University of Art and Design in Miami, and holds a Master of Arts from Barry University. Savdie also participates as an editor at Letra Urbana, a Spanish Web Magazine. She has exhibited her photographs internationally with ARS Antiqua Gallery in Colombia, and with NES Gallery in Buenos Aires, and Shanghai.